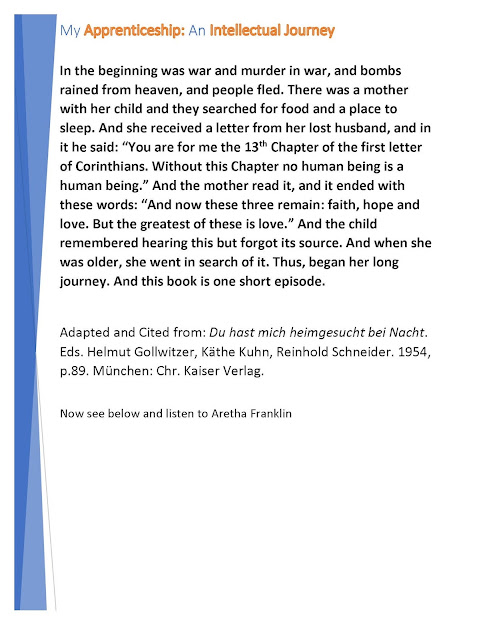 My Apprenticeship: Return from the field and changes in the Discipline

This blog shows two PowerPoint slides that move to the last Chapter of the book My Apprenticeship: An Intellectual Journey. The last Chapter was published previously in Ethnos (1996).

Importantly, the last Chapter includes later research conducted in southern Africa, the southeastern US, western Canada, parts of Germany and Britain. In South Africa itself, both my husband Irving Hexham and I did field work and life history interviews among charismatic Christians and among selected popular writers who were Afrikaans and English speaking. As well, we conducted archival research in the Berlin Mission for four months in 1995. In South Africa, specifically in 1986, 1987, 1989, we did field work for four months each year.

My approach to research became historical and global because of my reflection on my first long field work in Zambia as described in this book.

The two slides show that while I was deeply involved in my first fieldwork and the initial publishing of my findings, the discipline of anthropology changed. Some leading scholars asserted that “a new ideology was born.” I experienced a rude awakening.

The slide “Return from field and Changes in the Discipline” shows how Anthropology changed primarily, but not solely, as a response to two significant, if also flawed, works – for example, that of Edward Said and of Derek Freeman. Just as I started to publish, it seemed as if Anthropology had made a 360 degree turn from an emphasis on participant-observation and experiential knowledge to text-making rhetoric and experimental writing. Like it or not, I had to address this change.

The exercise led to many new insights of which the slide “An Example of Metonym as observed among Charismatic Christians” is but one example. It all has to do with how language is used to convey the reality of the believer’s experience to themselves and the listening anthropologist. Although believers were not themselves aware of it, they used certain figures of speech like metonym, for example, to interpret the happening of “resting in the spirit.” Examine the slide carefully, or go to the book, or go back and forth between the two and you will begin to understand what makes some religious happenings real to those who experience them in specific contexts.