Eldorado, a film by Markus Imhoof and My Apprenticship, book by Karla Poewe: The Refugee Question Now and Then


During WWII, as a Swiss child, Markus Imhoof was taken to a freight depot by his parents to pick up a refugee. He wanted a big brother but got an Italian refugee girl Giovanna. She became his big sister, but he lost her again when she was forced to return to Italy after the war. They became pen pals.

This traumatic childhood experience formed the personal core of his being and is the motivating force for his powerful documentary film, Eldorado (2018). Bradshaw The Guardian reviewer calls it “a deeply felt documentary essay on Europe’s refugee question.” It was played at the 2018 Berlinale, Berlin’s annual film festival. This is a shortened URL to The Guardian’s review https://goo.gl/2vyebo.

I am fascinated by this documentary art form. My childhood as a refugee during and immediately after WWII also triggered my field research in Zambia and now My Apprenticeship: An Intellectual Journey (2018). Since the latter is merely a book, memories of loss and confusion found themselves into my dreams then and surprised, occasionally even confused me, during traumatic happenings in the field. I recorded them in my Diary.

The comparison is significant, because just as Eldorado is a factually documented portrayal in visual form by a film maker recording and experiencing the reality of refugee happenings now, so too My Apprenticeship is a documented portrayal in written form by an ethnographer of field experiences in Zambia. In both cases, WWII childhood experiences triggered these “deeply felt documentary essays”, and in both cases aspects of the authors’ childhood trauma occur in the film and the book.

Should social sciences resist documentary essays because intellectual skill as well as deep feeling is centered, in the first instance, on the creator of the work? I think not. The creating person, be it of film or field research, is crucial to the work and, usually, because their childhood experiences were humbling.

For me and for the film maker Imhoof, personal stories play naturally into our work. This is a shortened URL to my book https://goo.gl/P8uYMV 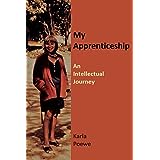 My Apprenticeship: An Intellectual Journey Available on Amazon Thursday February 15, 2018